I’ve been building my own PCB exposure unit. As seen on lots of web sites the unit can be made from UV LEDs instead of traditional flueorsecent lamps. The unit is not finished at all, but I’ll show the building and some comments about it. The unit is autmatic and has a programmable timer.

I used a cardboard as a base. I drilled some holes and soldered together the LEDs separated by 1.75cm. I added some resistors. As I’m using a 10V source, the connection scheme is 2 LEDs and a 235Ohms resistor. I used 2 470Ohm resistor in parallel as I have plenty of them and soldered everything together. I used 80 LEDs in 2 LEDs units (2 LEDs + 2 resistors) which make 40 units. You can use the LED legs instead of cable to save materials. I need a photo here!

The box inside is black-painted to avoid reflections. I divided it in two zones: the circuit/interface zone and the exposure area. You’ll have to do some holes, better ask for a Dremel! This is the result after some drilling work: 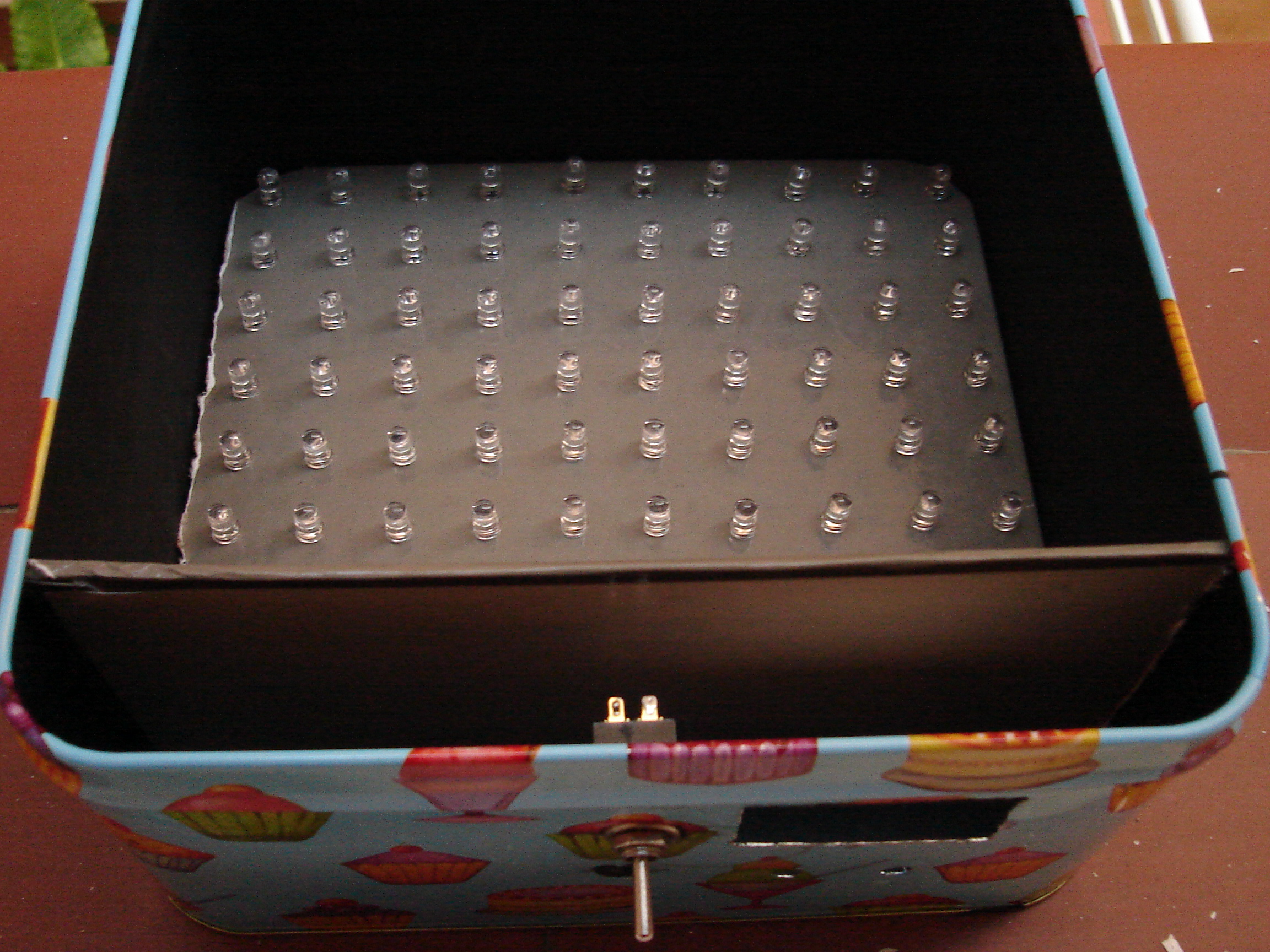 The digital circuit is quite simple. The PIC drives the display using the common trick of lighting one led at a time and switching them quickly so the eye doesn’t catch the trick. It uses the ADC to determine the exposure time and save it to the internal EEPROM. The push buttons are used to save the ADC lecture and to start/pause/unpause the exposure. One more GPIO is used to activate the relay trough a transistor. I’ll attach the schematic later. 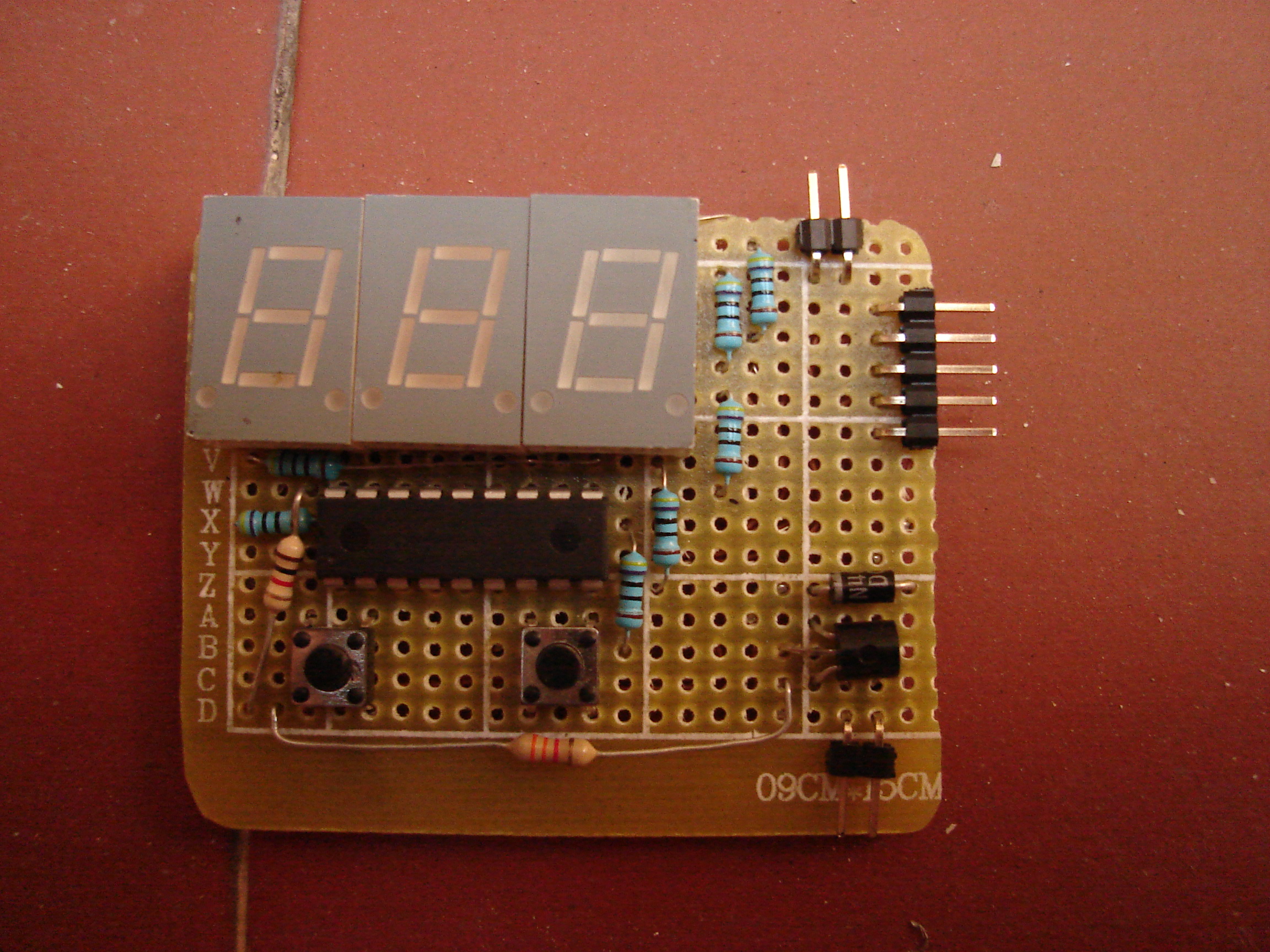 I added pinouts for the relay, power source and pic programmer.

Only the power source needs a final word. I used two 5V power sources connected in series so in theory the maximum power available (based on the ratings written on the package) is 1A * 10V = 10W. I did a quick measure on the LED unit and it sucks about 5W, so the whole unit should use about 6 or 7W at most. The digital circuit runs at 5V. Be careful with the source, it uses 220V! I enclosed it in a box but it’s a little dangerous because it becames very hot after 10 minutes. 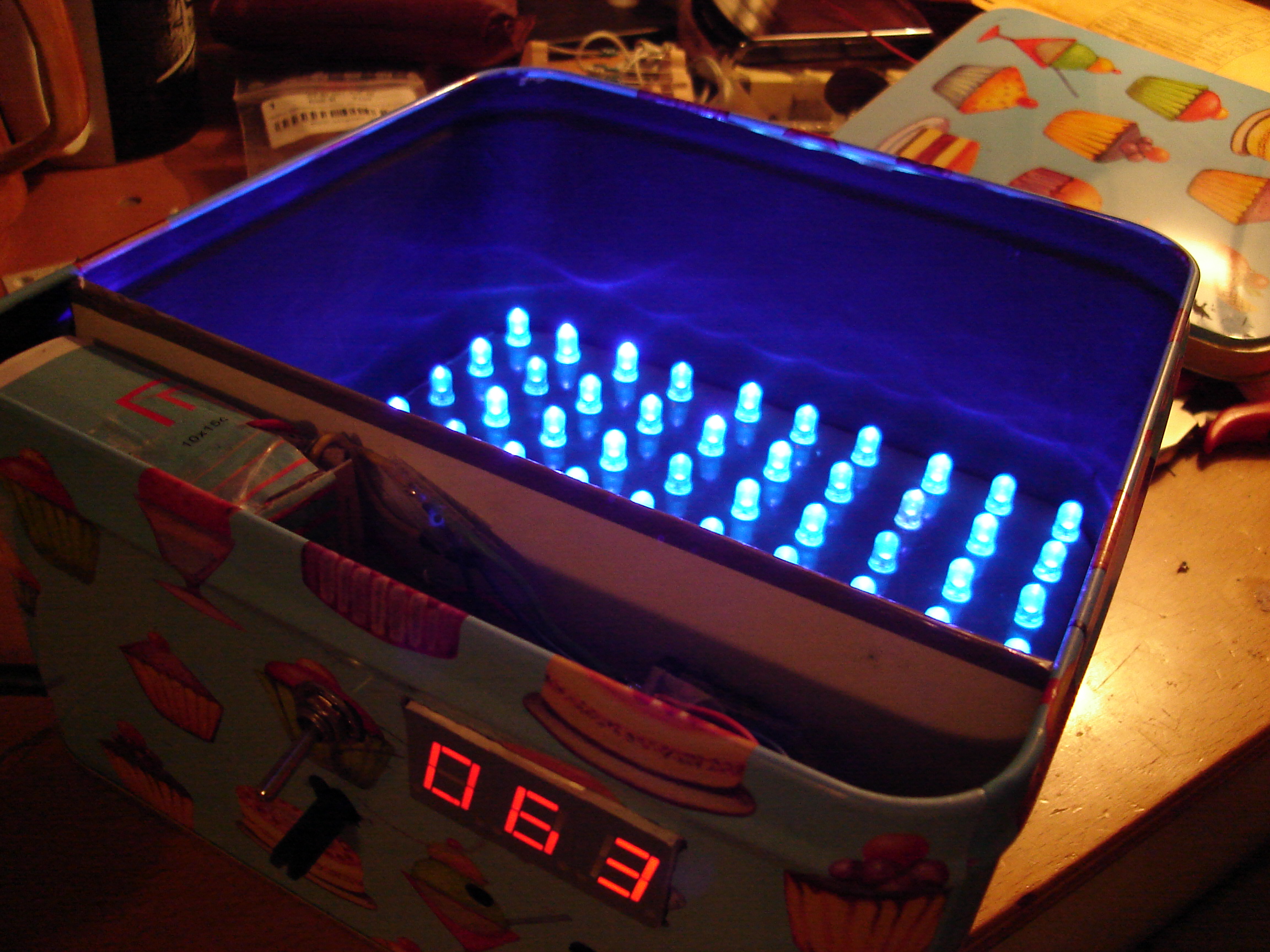 The only things that need to be done is to install the glass, paint the separator and install a diffuser to smooth the LED light, which is quite directional.

Of course I had some problems. What would be life without problems? The real problem is that I encountered them when the unit was completely mounted.

When testing the relay/timer duo with the LED unit (and the same power source) I faced a big problem, the relay switched on but after a short time (about 2ms or so) it got disconnected. My explanation for that effect was that the LED unit produced a big current peak (when switched on) which the power source couldn’t manage so the digital circuit and therefore the relay received less current/voltage than expected. That is a typical problem with mechanical parts, they produce discontinuities.

Adding the capactior added a problem. When switching off the circuit the PIC still received some power, so it continued working until the power faded out. This lead to a EEPROM corruption (maybe caused by reset and PIC malfunction at those voltages). The solution was to use the double switch (which at the moment was only used for the 220V source) by placing the capacitor between the power source and the switch, so that when I plug it off the PIC voltage reaches zero immediatly. The solution worked and now the time saved in the EEPROM doesn’t get corrupted anymore.

Isolate the 220V lines properly!!! It’s very dangerous to play with high power lines. I used some rubber tube to protect all the dangerous contacts, as my box is metallic.

In theory UV light exposure is dangerous for our eyes, don’t look too much. And it’s dangerous for the skin too, so take care specially if you have very white skin.