I created an Oxytocin molecule for our bedroom! Cause we are that geeky. It is laser cut, but since the cutter is rather limited (60x30cm bed) I did it in three parts, that can be ‘glued’ together.

A pic of the end result, for the curious: 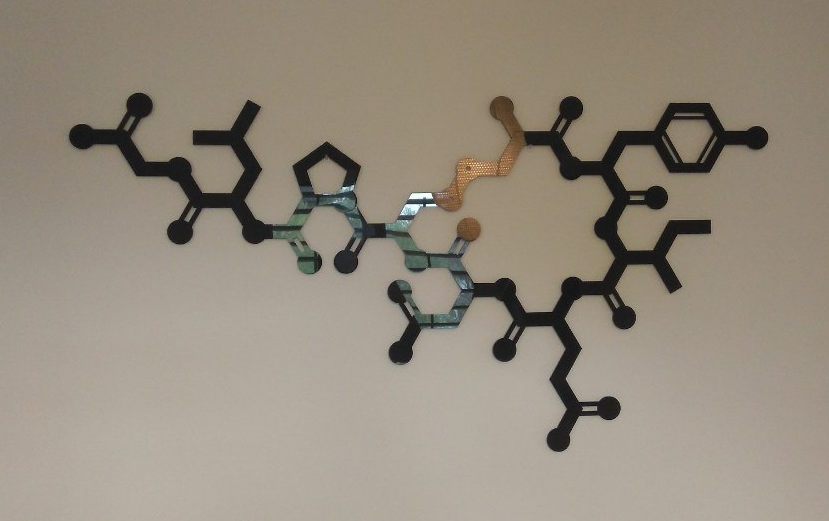 The process was rather easy, but involved some Inkscape time. First I created a full oxytocin design that I tweaked until I was happy with the result. I did some playing around with the packing and I came to the conclusion that I could pack it in 3 pieces (initially 50x30cm but I ended up using a larger cutter, so perhaps could have packed it in two?) although with a few small ends glued afterwards. It is hard and non-efficient to try print the small ends together: they weight almost nothing and yet they take a lot of space due to their positions. 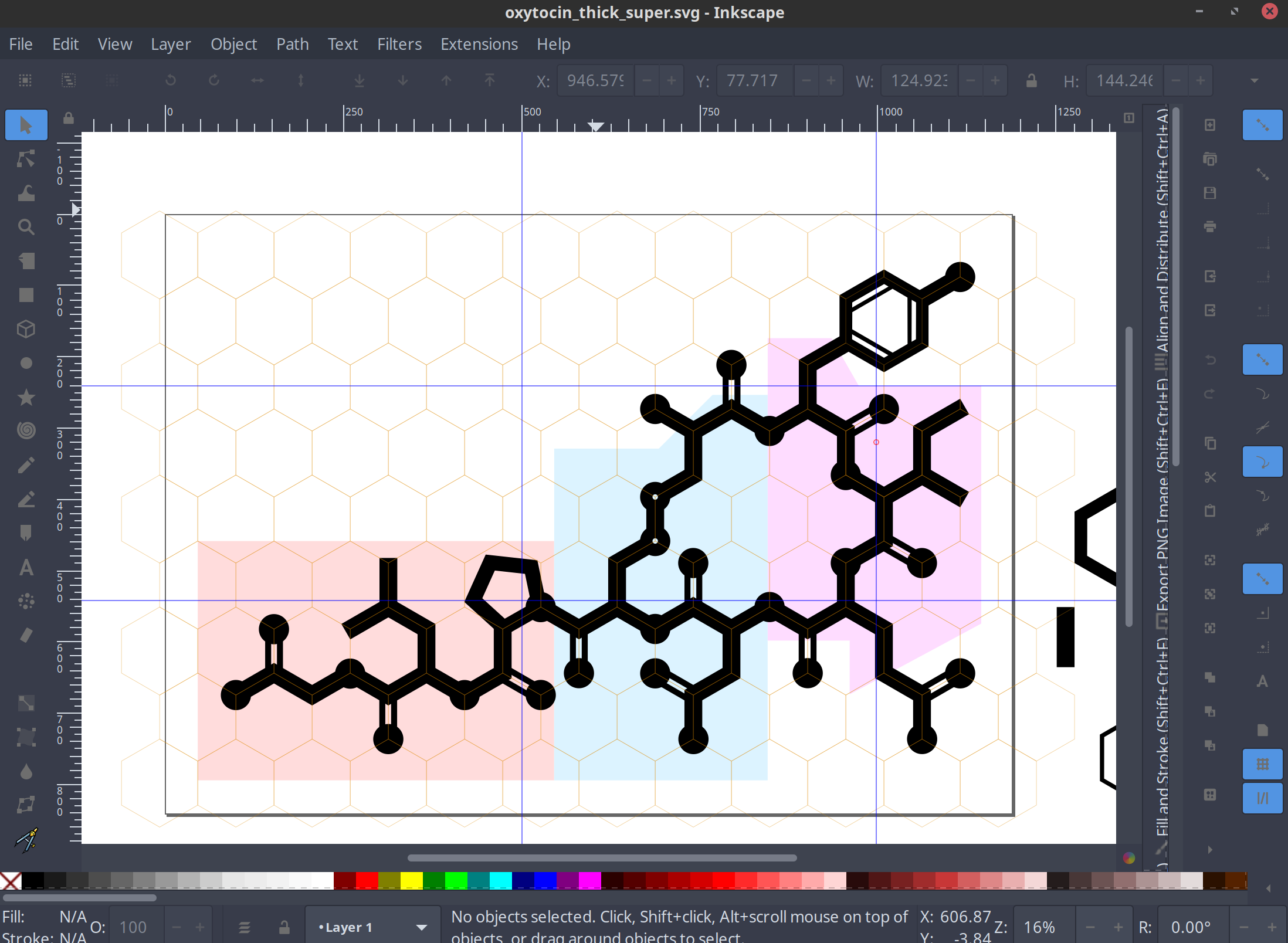 Now I proceeded to create three separate files for laser cutting, which you can find in these links: 1st, 2nd and 3rd. See also the big SVG for reference on how parts are joined toghether. Since it was my first attempt, I decided to go to my local Migros and get some thin wood (4mm) and try doing it on wood first. The result was very good! Gluing it with some carpenter glue resulted in a very robust thing that could be easily carried around. 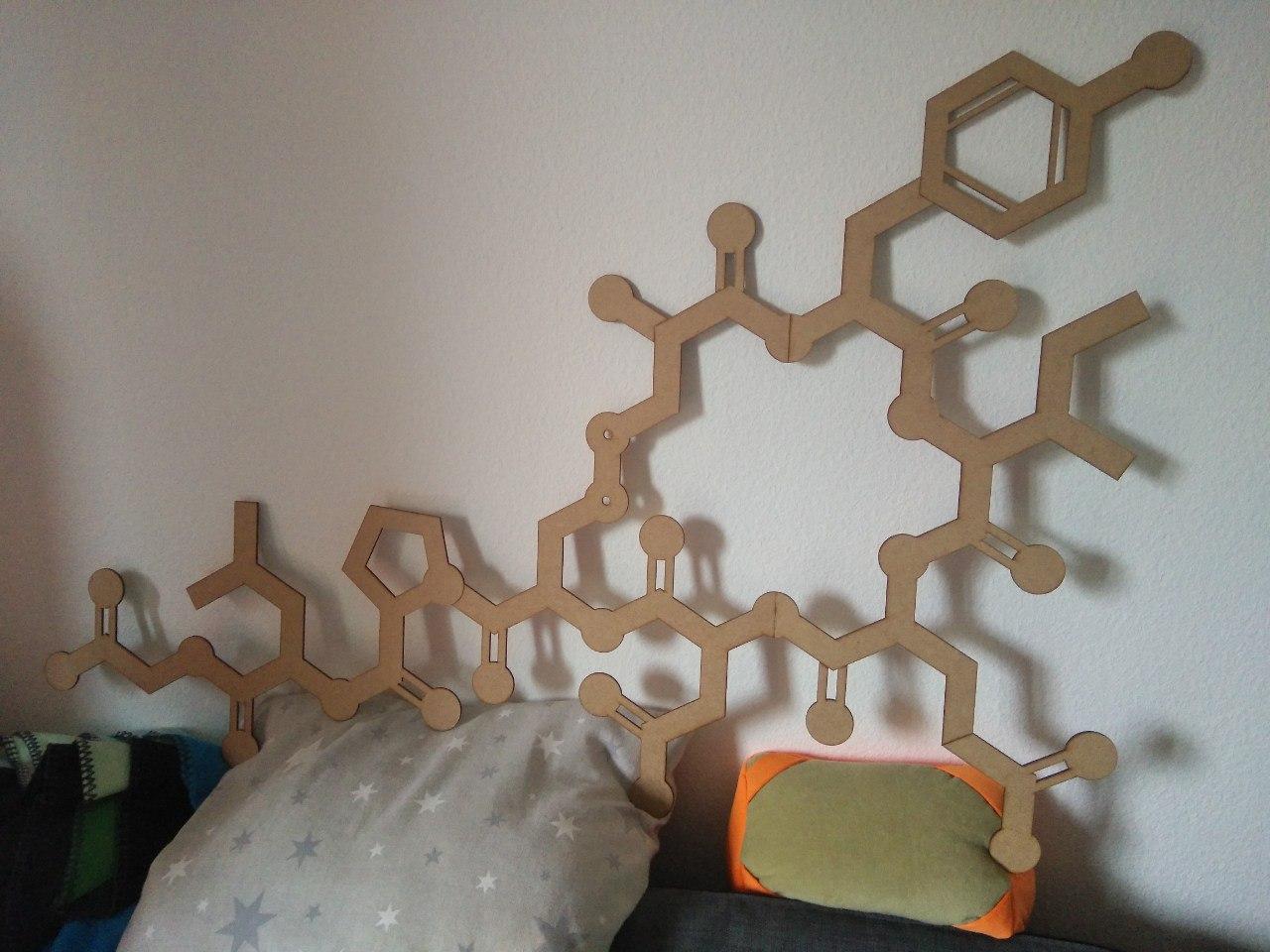 Finally, I proceeded to cut the acrylic version of it. It was relatively easy, after minor calibration, the result was amazingly good. Once I got all the parts I proceeded to glue them together using Dichlormethan. In my case I got it from a local shop, brand Modulor (for refrence: can be bought directly to the manufacturer here). This chemical is quite interesting, since it’s not glue at all. It will look like water (try not to inhale nor touch it) but it will sort of melt the acrylic. Placing a small quantity on top of the acrylic and then another acryclic bit on it will result in a very strong binding. Let it curate for a few hours and it looks like a single piece, very hard to separate again.

For the bindings I used the same approach as with wood: place small parts behind the figure and let them act as connectors. Since they are as thick as the figure itself (barely 4mm) the result figure will only stand out 4mm from the wall, barely noticeable.

As a bonus and since there was a bit of empty space I did a small oxytocine (single piece) that can stand on one’s desk, as a small ornament.

And that’s it! Hope you liked it too!